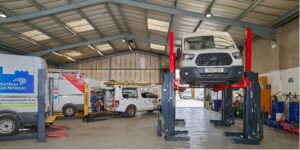 Van Excellence is a code of practice that outlines ‘what good looks like’ in van operations.

VLS Commercial Manager, Justin Bower, explains “The Van Excellence scheme is facilitated and managed by Logistics UK, the new name for the Freight Transport Association since July 2020, who are the leading experts in the industry. Members display accreditation on the vehicles they operate and are therefore nationally recognised as showing leadership and demonstrating best practice as committed and safe operators. We are delighted to have supported both Northern Powergrid, for a fourth year, and Northern Gas Networks, for a fifth year, in achieving this very significant industry recognition.”

VLS Contract Manager for NPg, Paul Hankey, adds “We first arranged accreditation to the prestigious Van Excellence standard for Northern Powergrid in 2017, and to retain the standard mark both VLS and Northern Powergrid are audited annually. Logistics UK carried out the audits of both parties in October and we are delighted to have achieved the accreditation for a fourth year, this being the third renewal.

“VLS are required to explain and evidence in detail the arrangements we have in place to manage maintenance provision including scheduling, legal event compliance and defect reporting. Other areas focussed on during the audit of VLS are fleet vehicle specification content, compliance and how each is determined, road fund licence renewal and fuel card administration. NPg were required to detail documented processes for such things as driver licence checking, record keeping, training and telematics.

“It really is a thorough examination of our collective processes, and it is extremely pleasing that we were not only able to demonstrate that we are meeting the standards required but exceeding them too.”

VLS Contract Manager for NGN, Chris McFadden, said “It is great to see our commitment to the highest standards on behalf of our end users being recognised in contributing to Northern Gas Network’s achieving the standard once again, this being the fourth renewal and fifth year of accreditation overall. Although VLS don’t own the NGN fleet, our fleet management services and maintenance operations are examined annually in exactly the same way as they are for the vehicles we do own, and which we supply to Northern Powergrid.”

Logistics UK auditor, Steve Irving, who carried out all four audits commented “Firstly, congratulations on the successful renewal of Van Excellence. I have audited VLS and Northern Powergrid since 2017 and VLS and Northern Gas Networks since 2016, on behalf of FTA, and now Logistics UK. Over the years, it is clear that there is a passion and determination to constantly improve on driver and vehicle safety and compliance in all three businesses. Each year, there are slight changes to various processes which help VLS work in unison with both NPg and NGN to achieve the same goal. The effort put in behind the scenes often goes unnoticed, but these accreditations once again shows others that hard work pays off!”

VLS was itself awarded Van Excellence partner status in 2012 as part of our ongoing quality and compliance commitment.